The Many Applications of Invisible Technology

What do we mean by invisible technology? We’re not talking about the type of invisibility seen in superhero movies or spy gadgetry, instead we’re looking at the technology that uses light undetectable to the human eye.

Just beyond visible light in the electromagnetic spectrum lies Infrared (IR) and Ultraviolet (UV). Both of these are undetectable to the human eye and are therefore, invisible. That’s pretty basic high school stuff, but let’s jump deeper into how they work and the many awesome everyday uses of Ultraviolet and Infrared; anything from IR thermometers in electronics, to the beauty industry!

But what exactly is the electromagnetic spectrum and why is some ‘light’ invisible? Firstly, it’s not ‘light’ at all. The tiny part of the spectrum that we can record with our own electromagnetic detection system (eyes) has historically been called light, but, in reality, we are dealing with electromagnetic radiation of different frequencies (measured in Hertz) and their associated photon wavelength; the lower the wavelength, the lower the frequency.

At the lowest frequency end of the spectrum we have radio waves, with a single wave spanning 100s of meters, right up to cancer-killing gamma rays, with a single wave spanning the fraction of an atom. The visible light sits between IR and UV with a wavelength of roughly 390 to 700 nm, and a frequency of 430-770 THz. IR, on the other hand, has a longer wavelength, covering the red extreme of visible light at 700nm to 1mm at a lower frequency of 300GHz to 430THz. UV has a shorter wavelength of 10nm to 400nm at 30PHz.

Okay, enough figures and on to the neat bit. Where would you find IR and UV used in everyday life? 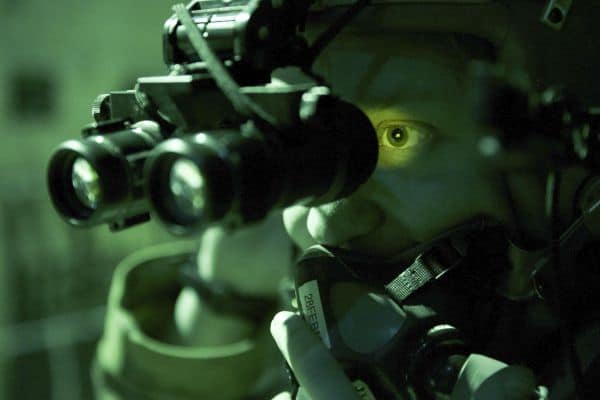 Night vision works by detecting long wave (9,000–14,000 nm) IR radiation and displaying it as a thermogram (a thermal image). IR radiation is emitted by all objects with a temperature above the absolute zero – it is therefore possible, when armed with a thermographing detector, to ‘see’ your environment without ‘visible light’, whilst the variations in temperature add depth and dimension to the images.

This essentially allows the user to ‘see in the dark’ and is used by wildlife photographers and the military alike.

Using the same concept as thermography, IR detection is also used in engineering in the form of IR thermometer guns. It facilitates a whole host of projects – from energy auditing the largest superstructures to minute temperature changes across electrical boards – just take a look at the highly accurate range from RS Components. The electrician can simply stand back, point the IR thermometer, and get a temperature readback on whatever portion of circuit they so desire.

Whilst IR is largely harmless, large doses of UV can cause damage. The sun emits the full spectrum of UV (10nm to 400nm) but most of the dangerous UV is blocked by the atmosphere. Having said that, the UV that gets through is enough to burn your skin or damages your eyes. It can also cause skin cancer and welders, who come into lots of contact with UV through their work, run a higher risk than average.

Whilst UV is more dangerous, humans have come up with ingenious applications for it.

Otherwise known as UV curing, this lamp works by triggering a photochemical reaction that ‘hardens’ a network of polymers and sets the varnish on your nails.

We finish on a fun and innovative use of UV. Often used in clubs, ‘blacklights’ operate with safe long-wave UV-A that pickup chemicals in washing powder and make your clothes glow. Similarly, you can buy face and body paint that glows in the dark.

An Iron Fish That Can Save Millions of Lives

Now You Can Smell the Internet